The supermarket retail giant Tesco has called for a 1% sales tax to be levied on its online competitors, claiming they are being disadvantaged by such operators.

You don’t even have to be a business analyst to recognise the fact that online sellers have had a very good year, where many high street stores have seen a reduction, or even a total collapse in sales due to Covid restrictions and lockdowns.

Supermarket wars with a difference

We are used to seeing advertisements on television where one supermarket claims to be better value than a rival supermarket, but now we are seeing a sort of coalition of supermarkets joining forces to achieve a common goal. Tesco is being backed by Morrisons, Asda and Waterstones to ask the Chancellor for a level playing field when it comes to taxation of their businesses. 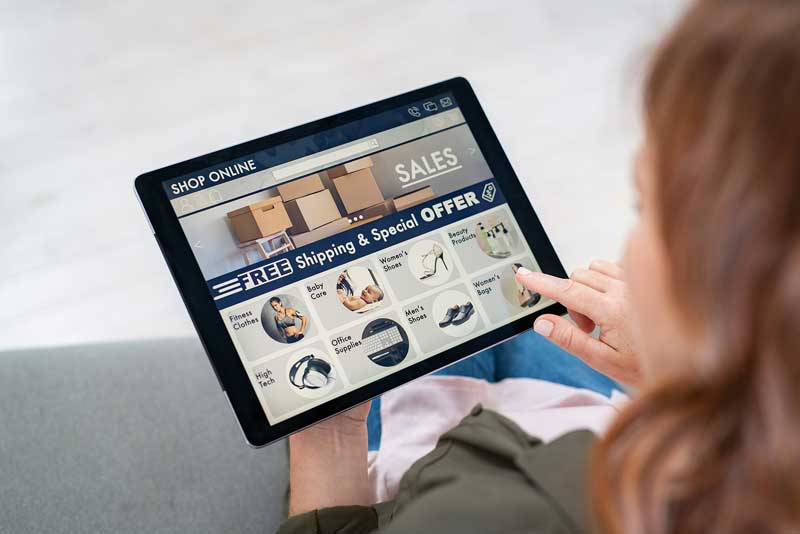 What is the problem with the online sellers?

The supermarkets and other high street stores claim that the current system puts retailers with large estates at a major disadvantage to online sellers. When you consider the size of the average supermarket, particularly the Tesco Extra size operation, plus multiply this by the number of towns they operate in, you can quickly see why they are so upset. This all adds up to a lot of real estate to pay property based business rates on.

In fact, Tesco operates 3,961 stores in the United Kingdom and the Republic of Ireland including franchise stores. Store numbers have been increasing since 2012. The company had the biggest increase in store numbers in 2014 with 246 more stores compared to the previous financial year.

Contrast this to the likes of Amazon who can operate out of a large warehouse and you can instantly see that there is no comparison with the premises needed to operate a store that customers actually visit.

Sure, Amazon is a big retailer and they have massive warehouses, but they only have seven of them, unlike Tesco with their number approaching four thousand stores. The online retail giant has their largest warehouse in Dunfermline. The Warehouse itself covers one million sqare feet, which is the equivalent of fourteen football fields.

But business rates were suspended due to Covid

It is true that many high street retailers have not had to pay property based business rates since the start of the Covid 19 pandemic, unfortunately for them, the tax is due to restart in April.

Some supermarkets had been heavily criticised for taking government support during the pandemic, even though they announced substantial dividend payments to shareholders. After the criticism some supermarkets, including Tesco and Morrisons, handed back business rates relief worth £1.8bn to the government.

Not just supermarkets call to tax the online sellers

The bosses of eighteen companies and retail groups have written to the chancellor to warn that a return to paying full property based business rates will damage the recovery of the retail sector after the pandemic has passed. They warn that the damage to their businesses could potentially put many thousands of jobs at risk. The group of eighteen bosses stopped short of asking for an online sales tax, but Tesco has called for a 1% levy to be placed on online retailers.

Much like a dwelling house, business rates are calculated by looking at the rateable value of a property and multiplying it by a tax rate set by the government. A new tax rate comes into effect at the start of each financial year on 1 April.

These figures are not at all surprising when you consider how Covid has affected our shopping experience. Many stores have had to limit numbers entering their stores, implement social distancing and hygiene measures. Of course there are also the amount of people who have decided to boycott physical stores for fear of catching the virus.

Some have opted for online slots with their chosen supermarket for home delivery, but with massive demand, comes very long waiting times for a suitable delivery slot.

Amazon is the giant that's cleaning up

Amazon have clearly done very well during the pandemic. With so many people stuck at home with nothing to do and no shops open to indulge that new hobby, the online seller has pretty much had a captive audience.

They have taken a fair bit of criticism though, as last week, Amazon was blasted for paying less in business rates than British retailers who had physical properties to run.

Unlike the poor year for high street retail, Amazon showed financial results that their United Kingdom sales for 2020 had totalled £19.3bn, a massive jump of 51% from just £12.6bn in 2019.

It's not that Amazon don't pay business rates, they just don't pay as much as their high street rivals because they don't have the same amount of real estate. Amazons overall business rates bill for 2020-21 is estimated by researchers to be £71.5m, which is a mere 0.37% of its retail sales. Amazon states clearly that it pays the correct amount of tax and has also created many thousands of jobs in the United Kingdom.

In contrast it has been estimated that physical retailers would have paid around £8.25bn in business rates in 2020, had they not been given a tax break due to the Covid 19 pandemic. The £8.25bn figure amounts to 2.9% of total retail sales, which is much higher than what Amazon pays when you calculate using the rateable value of their properties.

To put this into context, the Arcadia Group, which owned Topshop, Burton and Dorothy Perkins at the time, would have had to pay £91m in business rates on its 444 stores in 2020, had there not been a tax break. This is clearly far higher than the £71.5m payed by Amazon.

Many argue it's time for a change

Many argue that changing the business rate system would be a good place to start in trying to correct the imbalance between online and physical retailers. However, business rates had often been reviewed in the past twenty years and nothing had changed, because the need to keep the changes fiscally neutral meant that one sector could benefit only at the expense of another.

Many physical retailers want to see if some additional money can be created through something like an online sales tax, and then, if that can be ring fenced and made available to make some improvements to business rates, then they believe this would prove to be a really positive result.

Amazon are defending their position

Amazon have stated that they have invested more than £23bn in jobs and infrastructure in the United Kingdom since 2010. In 2020, they claim to have created 10,000 new jobs and 1,000 new apprenticeships. This continued investment helped contribute to a total tax contribution of £1.1bn during 2019. Broken down, this equates to £293m in direct taxes and £854m in indirect taxes.

A spokesperson for the Treasury stated that the government want to see High Street stores thriving, which is why they have spent tens of billions of pounds supporting shops throughout the pandemic and are supporting town centres through the changes online shopping brings.

Although no direct decision has been made to leave things as they are, or to impose the extra tax as the high street shops want, the government has made a clear statement. They claim that their business rates review calls for evidence included questions on whether they should shift the balance between online and physical shops by introducing an online sales tax. they are considering responses now and will update in due course.

It is clear that many high street businesses have and continue to suffer massively because of the pandemic. The idea that a fixed tax on online sales would allow them to keep their shops open after the pandemic has been disputed by some, because it will make no difference as their shops would still be closed. The argument appears to be about the extra revenue being ploughed into the physical businesses to allow them to survive these lean times. It has also been suggested that business rates should be reformed or even scrapped in the interest of preserving jobs in local shops.

Will business rates be scrapped for the high street?

Treasury economists have actually recognised that business rates are inefficient, however they are unlikely to change because taxing property is a safe bet because the property doesn't move, whereas sales taxes were not a good idea because they pushed prices up for customers while being unrelated to the level of profit made by firms.