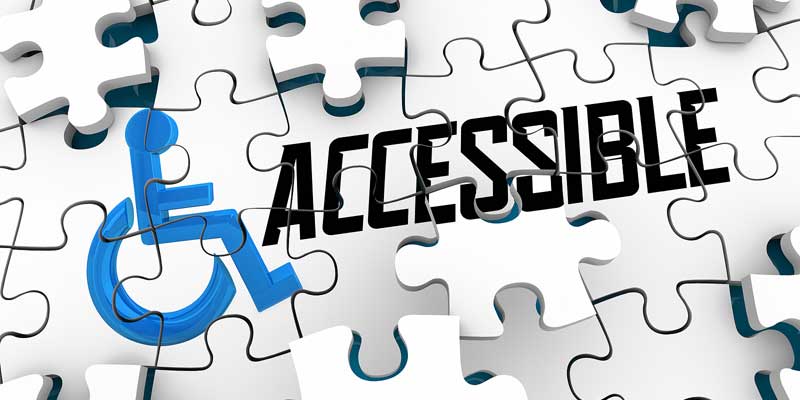 The Disability Discrimination Act 1995 has now been repealed and replaced by the Equality Act 2010. Formerly, it made it unlawful to discriminate against people in respect of their disabilities in relation to employment, the provision of goods and services, education and transport.

The Equality Act 2010 legislation contains a clause that could result in entire websites being taken off the internet if a disabled individual claims that it is not accessible.

The Equality Bill is going to replace the Disability Discrimination Act (DDA) and, much the same as the former Act, says that websites must be accessible to disabled web users. Very few have sued actual website owners under the old legislation and none that did resulted in a judgment. However, AFM have noticed that many local and national websites that were previously very poor on accessibility are begining to put their house in order and we believe this is the pre-cursor to a string of prosecutionsof other inaccessible website owners. Watch this space!

However, a person with a complaint about a websites lack of accessibility has a greater power under the Equality Act. In our opinion, there appears to be little benefit in personally bringing an action against the website owner, but informing who is hosting the website may well be enough to have the website removed from the internet.

This happens because a clause has been incorporated into the legislation that is standard practice in other legislation. By copying the European Union’s E-Commerce Directive, the clause states that a web host is not liable for a website owner’s failure to make their website accessible unless it is notified of a problem and fails to act on the notification.

The website host is likely to avoid liability under Schedule 25 of the Equality Act 2010 if they expeditiously removed the information or disabled access to it as soon as they obtained actual knowledge that the provision of the information amounted to a contravention.

This makes it possible that when finding an inaccessible website, a complainant may opt to ignore the owner and go straight to the websites host to report it. The host can then choose to either risk liability under the Equality Act 2010 or take the website offline.

The Disability Discrimination Act and The Equality Act 2010

The DDA and Equality Bill expect legal actions to be brought against the provider of a service that discriminates against others. A website owner is the most likely target and as such might be forced to pay damages for injury to a disabled user’s feelings. The owner might also be ordered to make changes to their website, to put an end to the discrimination. However, it’s extremely unlikely that a court would order the shut down of an entire site, excluding everyone, until an accessible redesign has been completed.

The DDA contained a power to sue someone who knowingly aids discrimination and a similar power is found in the Equality Act 2010. In theory, this power could be used against a web developer who follows a client’s instructions to build a site that discriminates. As stated earlier, as long as a website hosting company does not fail to act on the notification of discrimination from a complainant, a court would probably say that the host is the wrong party to bring an action against as they are too remote.

The Equality Act 2010 shields a host from the copyright-infringing or libellous content that can be uploaded by its customers or their users. Although a host must block or remove such content ‘expeditiously’ or run the risk of becoming liable for it. In other words, English copyright law states “if you infringe, you’re liable”.

The Equality Act 2010, And The DDA Working Together For Greater Website Accessibility

The Equality Act 2010, and the DDA, appear to take a more realistic stance of the situation. They say that websites should make “adjustments” to accommodate accessibility, but they allow courts to take into account the cost of adjustments and an owner’s finances. These laws recognise the fact that websites don’t become accessible overnight.

Determining accessibility is not an easy process to go through, and involves undertaking a very detailed and methodical search through the website in question to satisfy various criteria.

Keeping The Accessibility Issue In Perspective

With copyright and libel accusations, hosting companies tend to be quite cautious and may comply with requests, so the complaint will not actually be tested in a court of law. This may result in a video being taken off the website. It should be noted that the consequences are usually proportionate and if your website is accessible, a malicious complaint is not likely to be acted upon by the hosting company.

In conclusion, AFM firmly believe that the major hosts in the UK will not take down their customers websites on the strength of an email from a single user. If they did, their customers would simply start using an overseas host. Some may argue that the new legislation is useful because it will be a way of achieving greater website accessibility, whereas others say that it will cause all manner of problems for website owners and hosting companies alike. AFM believe any attempt to make websites accessible, as ours always has been, is a positive step towards turning the World Wide Web into a more inclusive arena.

Is There A Commercial Reason To Have An Accessible Website?

There are three good commercial reasons to have an accessible website.

But Dont Accessible Websites Look Boring And Cost A More?

These are the usual arguments from website designers who have little or no knowledge about accessibility or how to achieve it. All the websites produced by AFM are accessible, have a look at the websites on our portfolio page and judge for yourself. The website you are currently looking at satisfies the highest level of accessibility yet still includes graphics, animation and resizes to fit the available screen space.

As for the increased cost, if a website designer has a good knowledge of accessibility and incorporates the correct design techniques from the start (as all AFM web designers do) then there is a negligible cost increase in the region of 5-10%. However, this small increase pays off again and again for the reasons mentioned above. The cost of making an existing website accessible depends on the site itself.

We are happy to look at any website and provide some free advice over the phone or via email. If you are wondering whether your own website is accessible, or what would be required to make it accessible, then contact us on 0845 078 0193. We also provide accessibility audits on existing websites. These are much more comprehensive and described below.

As well as designing and developing accessible websites AFM offers an accessibility evaluation service for existing websites. Our evaluation will compare your website with current World Wide Web Consortium Accessibility Guidelines and supply the results to you in the form of a printed report. Included with each report is a compact disk containing the evaluation test evidence in the form of PDF files.

The main areas covered by the report are as follows:

Can You Be Sued?

Basically, yes. The RNIB has approached two large companies with regard to their websites. When they raised the accessibility issues of the websites under the DDA, both companies made the necessary changes, rather than facing the prospect of legal action (in exchange for anonymity). The same applies under the Equality Act 2010.

The Disability Rights Commission (DRC) launched a formal investigation into 1000 websites, of which over 80% were next to impossible for disabled people to use. They issued a stern warning that organizations will face legal action under the DDA and the threat of unlimited compensation payments if they fail to make websites accessible for people with disabilities.

How Do You Comply With The Equality Act 2010?

There are three levels of compliance according to the W3C.

The courts will also no doubt take guidance from the outcome of an Australian case in 2000, when a blind man successfully sued the Sydney Olympics organizing committee over their inaccessible website. The Australian Disability Discrimination Act quite closely resembles that of the United Kingdom. UK courts may also take into account the New York case against Ramada.com and Priceline.com, who were also successfully sued over the poor accessibility level of their websites.